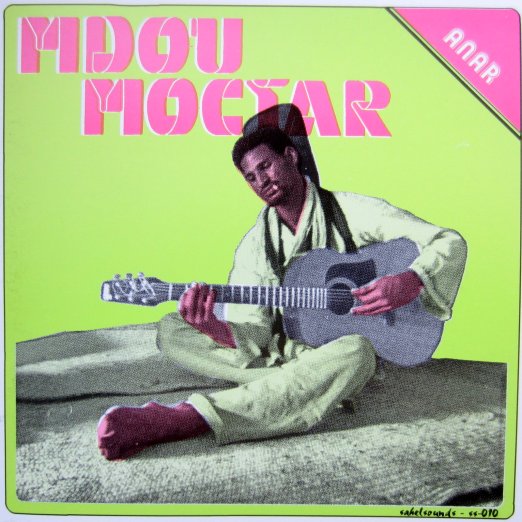 Sahelsounds is a wonderful label + blog founded by Christopher Kirkley. On his blog he regularly posts stories about his encounters with musicians in the vast Sahel region (Mauritania, Senegal, Mali, and Niger.). Many of the songs are field recordings he made using digital recording tools Zoom h2, Marantz PMD. It might sound quite easy: recording music and putting it online but when you read his posts and listen to the released tunes you will be amazed by the authenticity of this project. Check the bandcamp page of Sahelsounds for great LPs like ‘Laila Je T’Aime‘. In future I will let you know about new Sahelsounds-releases. Stay tuned.

One of the recent releases was ‘Anar/ Vanessa‘. Whereas ‘Anar‘ is the original autotune love-balad by Nigerien artist Mdou Moctar, ‘Vanessa‘ is the english version of it, translated and played by the Portland-based group Brainstorm. You may download it for a price of your choice.

The following blog-extract is an example of Christopher Kirkley’s writing in which he tells us about the story behind ‘La Super‘, a track written and performed by Mdou Moctar:

“Everything that he had earned in Libya, he gave to his mother. He had nothing left. He asked her for his old guitar that he had left there in his absence, sitting abandoned in the corner. He put on new strings and took it out to play. Two days afterwards, he left for Abalak with some new friends, but soon they had to return to their village. They liked his guitar. One week later, they called him and invited him to come and stay for awhile. They organized large picnics, sitting under the acacia trees.

There was a girl. And he fell in love with her. She would always say, “You are super.” So he started calling her “My Super.”

One day when they all came together, she wasn’t there. He saw later and asked, why didn’t you come, she said if you want to find me you know where to find me. He loved her, but he couldn’t say such a bold thing. He had just arrived. The next day, she was sleeping in the desert at Toruf, at her grandmother’s tent. He took a horse with his friend, Sayid, and went to the bush. He wore a strong perfume, and she knew it was him before he even arrived. There was a young man at her side, talking. The young man wanted him to leave. But she wanted him to stay. The three of them sat there in the dark. He talked to her, but the young man kept interrupting. Eventually after much deliberation, the young man left. He stayed and talked with her late until the night …” continue here on Sahelsounds.